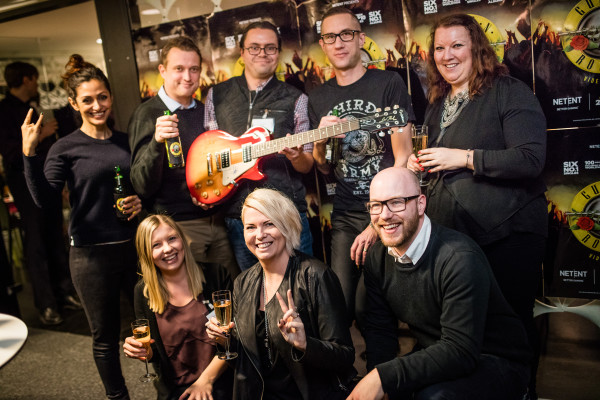 NetEnt has whipped up a rock frenzy with the announcement that the PAF Casino Team have prevailed in its one-time-only competition for a guitar signed by Guns N’ Roses legends Slash and Axl Rose.

Scores of NetEnt customers were invited to submit their most creative marketing campaigns, banners and videos in hope of winning the guitar signed by Guns N’ Roses legends Slash and Axl Rose that was presented last year during NetEnt’s game unveiling at ICE . The submission that got the crowd jumping most would be rewarded the highly-sought after prize.

PAF  Casino Team were picked from a list of almost 100 participating operators and were on hand at NetEnt’s offices on February 25th to pick up the signed guitar.

Per Eriksson, CEO of NetEnt, said: “The  launch of our Guns N’ Roses slot has been NetEnt’s most successful game launch ever, and the submissions and engagement we received from operatores for this competition took creativity to another level. The entry from PAF stood out for its edginess and originality, and we’re pleased to hand over the signed Guns N’ Roses guitar as reward. We hope that they have some skilled musicians to play it!”