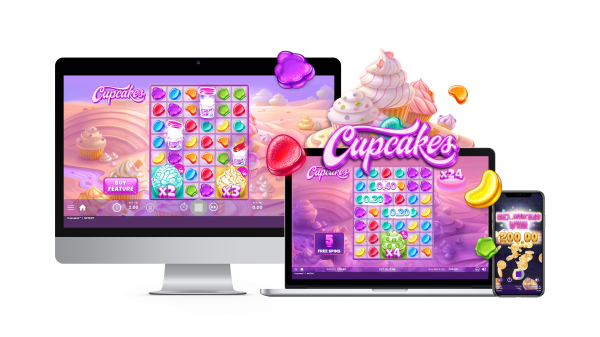 NetEnt has launched its sweetest video slot this season, where Gumdrops and fluffy Cupcakes come together in a symphony of mouth-watering features boosted by Scatter Pays and signature Avalanche™ mechanics.

When at least eight Gumdrops of the same color pop onto the reels, the Scatter Pays kick in for potentially delightful payouts. As giant Cupcakes fall to the bottom of the reels, they will collect Gumdrops of the same color. When at least ten Gumdrops fill the frosting atop the Cupcakes, they turn into Multipliers to enhance the original wager. Multipliers reset on each spin in the Main Game, as opposed to Free Spins when they only reset at the end of the Bonus Round.

During the spectacular Crush feature, giant Cupcakes may randomly rain down the reels to the bottom, crushing symbols in the way. Coming to rest at the base of the reels after the Crush, Cupcakes will start collecting Gumdrops atop their whipped cream to enhance Multipliers, once again. Free Spins Scatters may also hit the reels during the Bonus Round for retriggers.

Gionata La Torre, Chief Executive Office Europe at Evolution said: “Gumdrop symbols stockpiling on giant Cupcakes for Multipliers is an engaging concept created by the teams to bring additional excitement into this delicious-looking game. This novelty comes in addition to the well-known Avalnche™ mechanic, when the symbols disappear on payout and the empty places are filled with new characters. Cupcakes will surely be a mesmerizing title for all the cake enthusiasts and gum candy aficionados.”